Five Stars for the Phonitor mini

German portal for musicians Bondeo (www.bonedo.de) decided to give our Phonitor mini a test drive.

The result: Five stars out of…five!

Felix Klostermann compared the Phonitor mini directly to other headphone amps and he seems to have come to the conclusion that it plays in a league of its own:

“The SPL (Phonitor mini) masters perfectly the fine balance between too much high end and not-too-sharp highs.”

“It can handle transients marvelously, there is simply no sagging. But also the panorama was first-class and it allowed me to pinpoint exactly where different instruments were located in the stereo field.”

The Phonitor Matrix was, once again, highlighted as a very useful “aid:”

“It basically produces less stress during listening sessions and, consequently, is less fatiguing…”

According to Felix, listening to music is much more pleasant and authentic:

“The in-the-head localization is clearly improved and now “finally” the vocals are no longer behind my eyes but rather in front of them, just like on a real stage.”

In Felix’s view, the Phonitor mini is equally fit for “professional producers and engineers alike,” but he also sees other possibilities for it, which he sums up in his conclusion:

“… I would strongly recommend this powerhouse to ambitious bedroom producers, who can’t afford to have the best near-field speakers in their places due to bad acoustics or irritable neighbors or roommates, but still want to mix as “legally” as possible.”

There you have it!

The full review (in German) can be read for free at bonedo.de.

On proaudio.de you have the chance to win an SPL Phonitor mini All you have 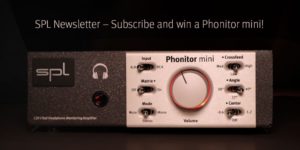 Good News: SPL newsletter is coming soon! All the news about SPL gear, events and

We’re happy to present a brandnew video focussing on the “Phonitor Matrix”. The video explains